Chancellor Philip Hammond is facing a huge backlash against the new Budget announcement which will see an increase to the rate of National Insurance contributions for the majority of self-employed workers. This change will result in approximately 1.6 million people paying £240 on average more every year. The Chancellor hopes that his plans will collect an extra £2bn from entrepreneurs by the end of the current Parliament.

Dr Julia Reid MEP, who represents the South West Counties & Gibraltar said: “The Tories are not even half way through their parliamentary term and already they plan on breaking their own manifesto pledge to not raise National Insurance contributions.

“This is nothing more than a shameless attack on enterprise. As a consequence of this, the tax-hike will only help to deter people from going self-employed and could even have a lasting effect on future unemployment figures as well.”

The Chancellor has suggested that the clampdown on tax breaks for the self-employed are needed to fund the extra £2bn committed to adult social care in the Budget, stating that “We have to pay for these things somehow.”

In response to this, Dr Reid said: “Rather than increasing National Insurance contribution rates for the self-employed, why don’t they listen to the electorate and cut the wasteful foreign aid budget instead? A poll conducted a few years ago, by YouGov, found that only 7% of the British people want the overseas aid budget to increase, whilst 66% of the British public want it to decrease.

Dr Reid added: “During his budget speech, Mr Hammond cracked a joke about the ‘Last Labour Government’, playing to the fact that Labour have become almost unelectable under Corbyn’s leadership. To many, it’s become rather clear that the Tories no longer see Labour as a threat, therefore one has to wonder whether the Chancellor would have still announced such disgraceful budget cuts if this was still the case.”

“This is just one of many reasons as to why UKIP must replace the Labour party as the official opposition party”. 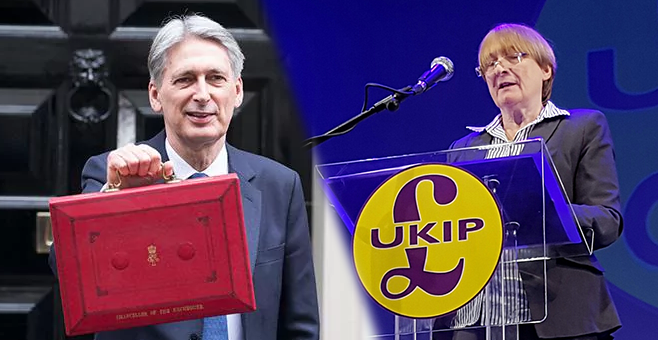