As of the High Court’s ruling yesterday, the Government cannot trigger Article 50, and thus start the process of leaving the EU, without consulting  parliament first.

In the wake of this news, several mainstream news sources have reported that the majority of the electorate now want the UK to remain a part of the EU, according to the data from a recent poll.

The Independent reported that: “Remaining is now backed by an extremely slim majority of 51 per cent, versus 49 per cent who wish to leave the EU”.

After reading these articles, Dr Julia Reid MEP, who represents the South-West counties and Gibraltar, said: “It looks as though the establishment media is already trying to justify the High Court’s decision to ignore the will of the people! And to be completely honest, it really doesn’t surprise me in the slightest.”

“However, what they neglect to tell their readers is that the agency who conducted this poll, BMG Research, predicted that Remain would win with 52% of the vote in their Final EU Referendum Poll* which they published less than a week before the day of the referendum.

“Let’s also not forget that during the run-up to the 2015 general election the vast majority of polls suggested that the Tories and Labour had near enough equal support, and we would end up with a hung parliament, they couldn’t have been more wrong. 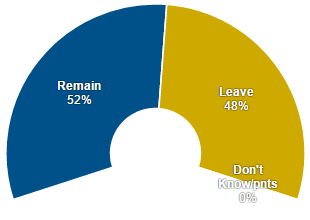 * BMG’s Final EU Referendum Poll – Telephone
Should the United Kingdom remain in the European Union, or leave the European Union?
Base = 1043 UK Residents aged 18+; Fieldwork conducted 10-15th June 2016, Figures may not sum to 100% due to rounding
The graphic above shows excludes Don’t know/Prefer not to say

With Brexit, we will determine our own environmental and energy policies free from EU commission