Paul Nuttall has been announced as the new leader of UKIP

Paul Nuttall has been announced as the new leader of UKIP

Following today’s announcement at the Emmanuel Centre in London, Dr Julia Reid MEP is pleased to share that Paul Nuttall has been elected as the new leader of the UK Independence Party with 62.6 percent of the vote.

Paul Nuttall MEP is a long-standing member who has held a number of important roles within the party, including, but not limited to, founding secretary of our youth wing, party chairman, and most recently, deputy leader. In addition to this Paul also leads the Initiative for Direct Democracy in Europe, and is a Member of the European Parliament.

With regards to Paul’s recent election as leader of UKIP, Dr Julia Reid MEP said: “I’m incredibly pleased with the decision that the membership have made to elect Paul Nuttall as our new party leader, I believe we have made a very wise decision.

“Paul is a very charismatic and dedicated individual and his wealth of experience in fulfilling numerous roles within the party makes him more than qualified to lead the party.

“He’s also an incredibly motivational leader. I remember the first time I met Paul, it was on a gloomy winter evening in a freezing cold skittle alley, at a pub in Pewsham. He came to talk to a group of despondent North Wiltshire and Chippenham activists shortly after a disappointing result in a general election, and yet despite the situation, Paul’s upbeat pep talk cheered us up and encouraged us to keep battling on.

“Consequently, I am convinced that Paul Nuttall is the best person to lead our party on to ever greater heights and our future success in the 2020 general election.

“If the establishment parties fail to respect the result of the referendum, which is on record as one of the largest democratic exercises in British history, then we could well expect to see Paul moving into 10 Downing Street following the next general election”. 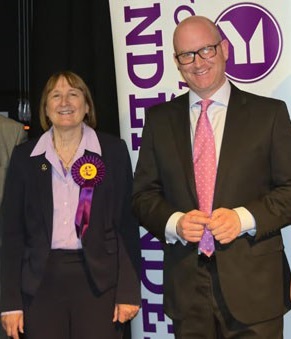 With Brexit, we will determine our own environmental and energy policies free from EU commission