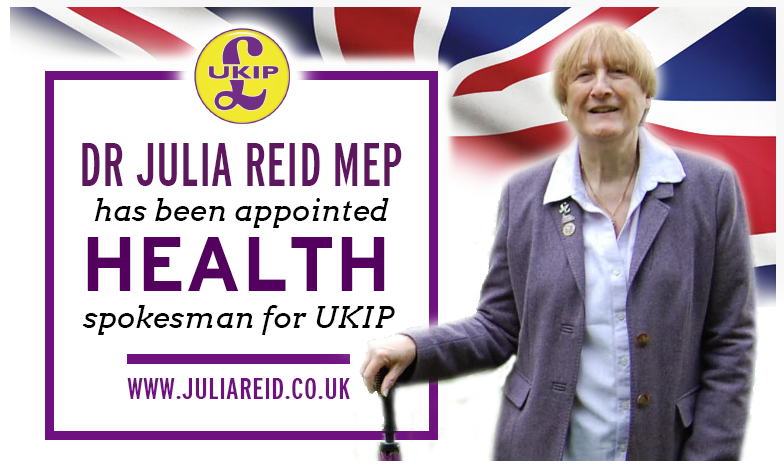 Dr Julia Reid MEP, a research biochemist by profession with a PhD in Pharmacology, has been appointed as UKIP’s Health Spokesman by Steve Crowther, the party’s interim leader. Dr Reid has a considerable amount experience in the NHS and was, for over a decade, the Laboratory Manager of the Diabetes and Lipid Research Laboratory at the Royal United Hospital in Bath.

This comes after Suzanne Evans, UKIP’s previous Health Spokesman, announced that she will be taking a break from active politics to recover from her cancer treatment.

Dr Julia Reid MEP, said: “First and foremost, I want to extend my best wishes to Suzanne Evans, she’s done an excellent job as the UKIP’s health spokesman and has been an asset to the party.  I hope she makes a quick recovery and enjoys her much needed break from active politics.”

With regards to her appointment as UKIP’s new health spokesman, Dr Julia Reid MEP said: “As someone who has worked within the NHS for a considerable amount of time, I can say with the utmost sincerity that I’m incredibly proud of our NHS and that I’m very honoured to have been appointed as UKIP’s health spokesman. Our NHS is world class, it’s a national treasure, one that sets us apart from the rest of the world“.

“But as we celebrate the 69th birthday of our National Health Service today, we mustn’t ever take it for granted. A catalogue of failures by successive Labour, Coalition and Tory governments have left the NHS in a state of crisis and it’s now in a desperate need of additional funds.”

“As UKIP’s new health spokesman, I will actively push for the Government to implement our 2017 manifesto policies in order to protect our beloved NHS and its patients from further failures.”

Dr Reid will keep her role as Environment Spokesman as well.

UKIP’s Health Spokesman: With more 86,000 vacant NHS posts in the first quarter of this year, it’s about time we stopped taking our NHS staff for granted!